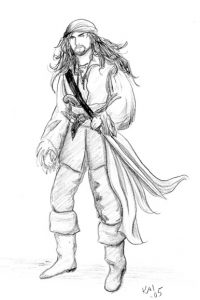 Here’s a little bit about himself, the so-called hero of this story:

His name is Nicholas Swift, but he’s commonly known as Bonnie Nicky—or just as commonly, as Nicky Swiftleathers, since he’s something of a coward and will run from most fights, unless he’s sure he can win. I think he’s about 30 years old, born sometime around 1640 in the town of Bantry in County Cork, Ireland. Nicky isn’t much of a fighter, but he’s quick-witted, scheming and a little unpredictable, being as he is also more than slightly crazy. He gets even crazier when drunk. He has an enormous ego and thinks of himself as a great lover. His women tend to humor him, since he likes to buy them things. He also steals women, and always has a bevy of them around him. He is an arrogant loudmouth who can be extremely violent, if actually cornered and forced to fight. He claims to have a ship by the name of Órflaith (Golden Princess), but I don’t know if I believe him or not. He often stretches the truth about his wealth, status, and exploits, so you can never be sure what to believe.

I think he’s a pretty silly fellow. He’s not only an infamous swasher of buckles but also a notorious pincher of women’s bottoms.

And now, the story:

Bonnie Nicky Swift swept through the Dublin market stalls, halfway dancing a jig to cover up the sway of his sea-leg stagger. He sang his favorite drinking song as he went along, winking at the ladies and waving at the children as if he was just another yokel drunk off the latest wagon from Galway, and not a dastardly pirate on the prowl for some land-bound fun.

His trilling tenor barely rose above the din of the market. “Ohhhhh, if I get drank, well the money’s me own, and them don’t like it they can leave me alone! I’ll tune me fiddle, and rosin me bow, aaand I’ll be welcome, wherever I go!”

He paused to make a sweet little bow to an old fishwife, who merely sneered at him and huffed her attention back to her mackerel. That didn’t bother him. He kept right on singing and swinging merrily through the crowd.

“Toora-loora-loo, toora-loora-lay, toora-loora—Lord!” he yelped, and stopped short, his eyes wide and fixed upon the very large, green-skirted bottom of a woman, who was bent over a vegetable bin. Nicky licked his lips with a smack, and put both hands on his hips, staring at her generous bum. “Ohhh! Lord strike me dead if that ain’t the finest bottom I ever seen! I got to pinches it, I does!”

His lips turned up in a big grin, and he snuck up on her in a melodramatic way. Just as he reached her, he stuck out his tongue, leaned forward and pinched the bejeezus out of her.

“Eeeeeek!!!” she shrieked, popping up and spinning toward him in a flurry of red curls. Her right hand was already swinging around to slap her attacker, but she missed. Nicky ducked and half tackled her around the waist, trying to toss her over his shoulder in the same motion. But she was heavier than he expected, so his eyes bulged out and he huffed as he hefted her up.

The woman squirmed, furiously kicked her feet, and pummeled his back with her fists, yelling at the top of her lungs. “Put me down, ya filthy pig! Put me down! I’ll kill ya for a dirty dog!!”

“Heehoo!” he hooted, slapping her bottom. “She’s a fire in her, too! What a fortune we’re havin’!” He smiled appreciatively at her squirming bottom, and then happily rubbed it. “Stay yerself, me velvet heifer! Meself’ll take good care of that fine bottom!”

“Eeeeeek!!!” she shrieked, again, squirming all the more fiercely. “Let me go! Let me go!!”

The other market-goers paid no attention to them, so Nicky just staggered off with his prize, trying to keep her wriggling body balanced on his shoulder. Her shrieking continued, as did her pounding of his back with her fists, but he didn’t seem to mind it. He kept right on singing, now louder and happier than ever.

This little site is my personal treasure box, a spot to keep all of my loose stories from running off and getting into trouble.

Help Kai keep the creative juices flowing. Buy him a beer! Or six!